Last weekend one of my closest friends on the whole planet got married.  We've been friends since 7th grade...that's a lot of years of friendship!  I'm super lucky!  Here are a few things I would like you to know about her:

Even then, she wasn't so sure about being the "married girl"...she kinda liked the idea of being the "live-in girlfriend for life girl".  But you just can't help it when you meet the right boy.  And so last weekend they tied the knot!  It was a blast!  (Remind me to tell you about it one day...there was a dance off...and a pinata cake...and a nacho fountain...and so many other kinds of awesome!)

Anyway, it only seemed fitting to make my Single Girl, a SingleGirl.  (Plus, let's face it.  It's such an awesome pattern!) I don't think I would have made it to the end of this project if I had been making it for anyone else though...every step presented some sort of challenge and it definitely wasn't the instant gratification kind of quilt, you know?! 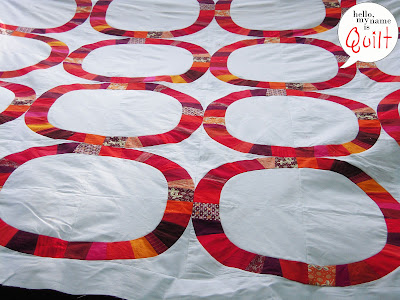 I started with the color of the bridesmaid dresses (bordeaux) and pulled some solids to match (kona, linen, fabrics of unknown composition) as well as the wine-y prints from Hope Valley.  I knew I wanted to move towards the reds...you know, just in case the Married Boy didn't want to live life with a purple quilt.  So I pulled nearly every shade of red offered by kona, plus some oranges, coral, and a pink (not so manly, but it looked good in the mix...sorry married boy!).  And then I still needed about 8 bazillion more fabrics, so I picked a ton of prints in reds and rusts (and the orange Hope Valley flowers...cuz they're awesome) and even a few pieces from my Denyse Schmidt scrap bag.  (Too perfect, right?) 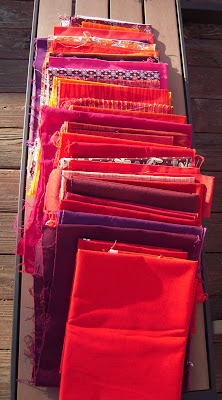 I'm not gonna lie...prepping was a bitch-and-a-half!  EVERY little piece had to be traced and cut by hand...my right had turned into a claw...it was ugly...but I really, really love my friend. 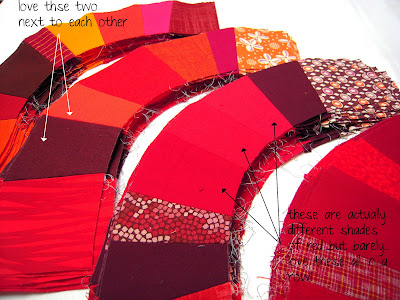 Piecing went pretty smoothly though and by some miracle, the quilt top was pretty flat and closer to being square than trapezoidal...good enough for me!  So THEN came the hard part.  I knew I wanted to quilt interlocking rings into the Single Girl to turn it into a wedding ring quilt (the Married Girl!).  I did not know what else to do with it though.  I tried marking echo lines around each ring but I just wasn't feeling it...  I finally decided on pebble quilting...and let me tell ya', my natural pebble is pretty small, which meant I was really gonna have to bust ass!  A sane person would have chosen something simpler or faster.  I mean, I started making this quilt in the winter...and somehow I only left myself 1 month to quilt it?  I am not right in the head!  The thing is, that once I figure out how a quilt is supposed to look, I can't let it go.  It has to happen.  I think between June 4 and July 4, I spent a total of 2 hours of my free time away from this project.  I couldn't even stop for blogging.  I barely made it to the grocery store...I only slept because my husband made me...  After the first week of quilting, I lost feeling in my arms and after the second week I started to look like a turtle...but I stayed strong (hey, my Single Girl wouldn't cry about it..she'd tough it out and give that quilt a kick in the pants!)...  And it turned out just the way I pictured it!! 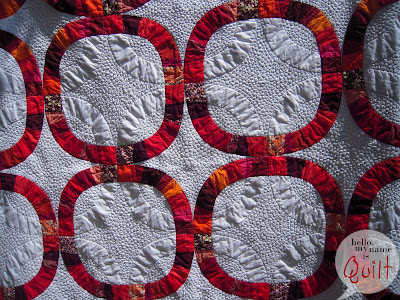 (it might be easier to see the quilting on the back...)
I used Quilter's Linen in red for the binding.  I had planned on using that one from the beginning and I even factored that into the equation when I ordered yardage.  I could barely believe that I had been so on top of things!  (There's a first time for everything!)
Once I had the binding on, I threw it in the wash with 6 Color Catchers.  I am not exaggerating.  Not even a little.  6.  And then I averted my eyes and prayed to the laundry gods.  The colors catchers (all 6) came out pink, but the quilt was in perfect condition!  I wanted to marry every person on the Color Catcher patent and every person associated with the manufacturing, marketing, and distribution of the most wonderful invention of all time (damn you, laws against polygamy!)...if one of them had showed up on my doorstep, I probably would have made out with them. 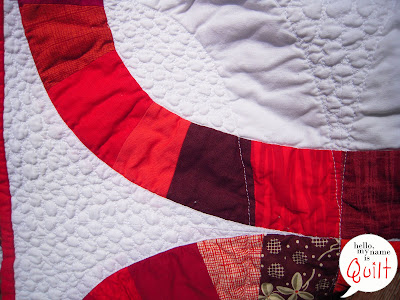 So there you have it...the story of my Single Girl.  This quilt is far from perfect - I think red threads were multiplying inside the basted quilt - but I packed a lot of love into it.  Of all the quilts I've made in life, I think this one is my favorite and I can't think of a better home for it than with the Married Girl and Boy!  I seriously love them!
Posted by Shannon at 8:35 PM

What's on your mind?