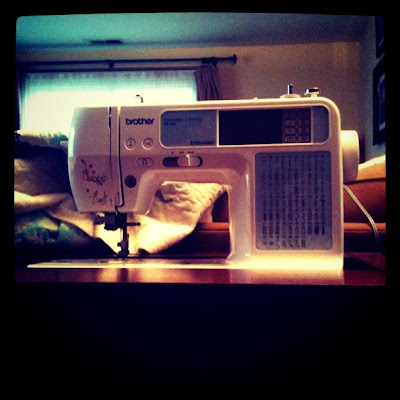 You might remember a few months ago when I found Dan's blog, Piece and Press.  I was rendered speechless...not an easy feat.  He's the genius behind the Green Stag Quilt.  (Someone other then myself bought it...I will never recover...it's the one that got away...)  Anyway, since I want to be just like Dan, I tried my hand at reverse applique.  I made a block for do. Good Stitches. It just so happens that Dan just revealed his latest project too.  I bet you won't be able to tell which is mine and which is Dan's.... 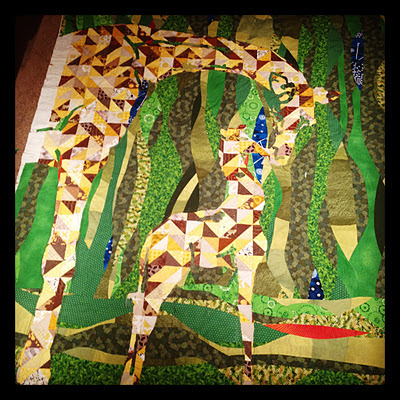 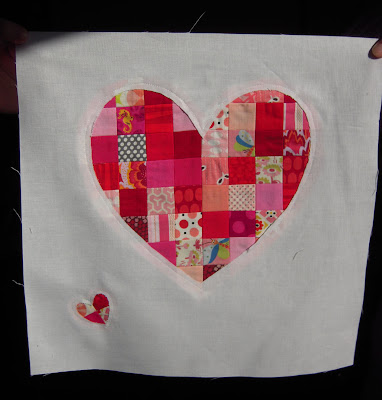 You're probably having a hard time with this one since they're both so intricate and advanced, so I'll go ahead and tell you the answer...mine is the heart and Dan's is the giraffey one (check out his process posts too, here and here).   I know that was a tricky one.  I mean, they're practically the same.  (Ok, I can't even type that with a straight face!)  But you have to start somewhere, right?  Baby steps to becoming Dan...
Posted by Shannon at 6:49 AM 8 comments: 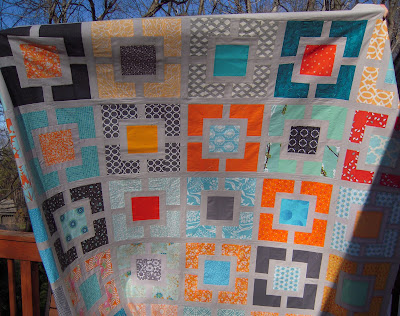 I got about 90% of the quilting done on my do. Good Stitches quilt....I was in the home stretch...and then my baby started skipping stitches.  BOOOO!!!  HISSSS!!!
I knew I was overdue for a tuneup.  I've had this machine for about 3 years and it has never had a checkup.  So I finally sucked it up and took it in...and now I have 5-8 more days of waiting...and not sewing...  I feel lost.  What's a girl supposed to do without a sewing machine?
Posted by Shannon at 4:45 PM 9 comments:

Email ThisBlogThis!Share to TwitterShare to FacebookShare to Pinterest
Labels: do. Good Stitches

it's a little bit of a crazy idea...but here goes.  I have big plans for a baby quilt for some close friends.  I'm picking a single color and I'd like to mix and match tons of prints and solids.  I've had the idea in my head for ages!  AGES I tell you!  (Think Elizabeth Hartman's billboard quilt.)
Anyway, the thing that's been holding me up is picking a color.  I was kinda leaning towards orange and once I feasted by eyes on this bundle of joy, it was official. 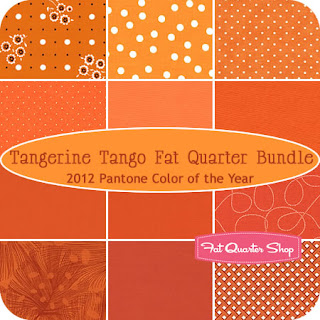 I'm ordering one of these puppies as soon as I finish typing this post!
Now this is where it gets a little crazy up in here.  I still won't have enough oranges in my stash to execute my plan.  So instead of sticking with my usual scheme (which is to buy 800x more fabric than I actually need for a given project), I am proposing a little fabric swaperoo.  Here's how it will work:
You send me an orange piece of fabric (or two or three).  Each piece should be either 2.5", 5", 7.5", or 10" square (you know, something I can cut into 2.5" squares).  Prints and solids welcome.  In return, I'll send you a piece of equal size from my stash.  (Feel free to request a color or even a print that you've seen here...I can't promise that I'll be able to make your hopes and dreams come true, but I'll sure as hell try!)  All you have to do is leave a comment with a way for me to get in touch with you so we can work out the deets!  (It's possible that you're a "no-reply blogger", which means I won't be able to reply to your comment.  Don't feel bad.  I used to be a "no-reply blogger" and I didn't even know it.  This post will teach you how to become a "yes-reply blogger" in no time!  Or you can just include your email address in your comment.)
I feel like this has the potential to turn crazy, but we'll see how it goes!  Anybody game?
Posted by Shannon at 6:19 PM 5 comments: