Ok, now I know I said I was going to work on another fancy, shmancy paper pieced house.  But almost immediately after hitting "publish post" I changed my mind and decided to try my hand at that Night and Day block again.  (I don't want to ruin the surprise, but before you scroll down, please start humming the most triumphant song you can think of!) 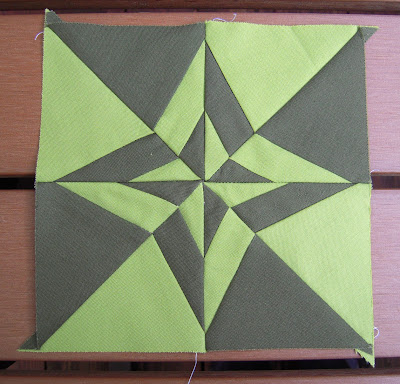 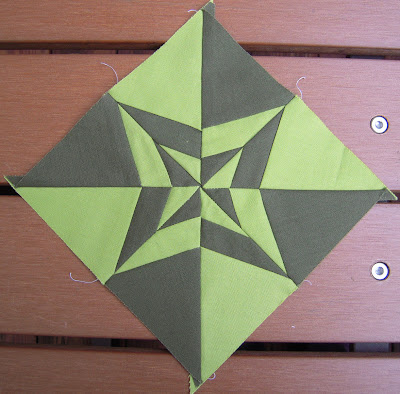 I don't know how to make a picture spin to really showcase its glory...but if you scroll back and forth between the two really quickly you might be able to achieve the same effect!

As if that wasn't enough, I also made some scrap bins for my cutting table.  I had been using an AWESOME system of throwing scraps into 2 piles: one for stuff to save, one for stuff to throw away. But my cutting table is about 2 square inches...ok, more like 2 square feet (just big enough for my cutting mat)...so you can imagine how well my piling scheme worked...every time I started a project, my piles would grow together into one, giant, amorphous blob.  Then I would have to try to pick through them (you don't think I would throw away a usable scrap, do you?).  So I FINALLY made little bins for myself! 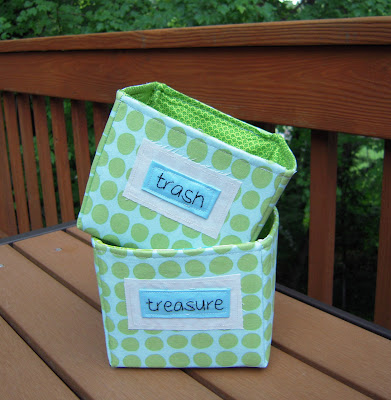 (Note about the labels: My father-in-law rescues stray, inanimate objects that he thinks were discarded by owners who clearly underestimated their lifespans - said objects are typically found on the side of the road - he calls his process Trash 'n Treasure.  We think it's funny!)

I used the tutorial from The Sometimes Crafter - it was SO easy to follow!  The only tricky part for me was working with the world's stiffest and thickest stabilizer (Pellon Peltex 71F...I think it might be bulletproof!)  It was actually really easy to sew with it, but trying to manage the stabilized fabric and pins at the same time while everything was in basket formation required a little effort!  (I imagine with normal interfacing, there would be no wrestling!)  For the outside, I used my Amy Butler Sun Spots  (I got excited and ordered it without paying attention to the fact that it's home dec weight.  But this was the perfect use for it!)  Then for the lining, I used random FQs from Joann Fabric (labels made with scraps and attached with lite Steam-a-Seam 2)...I love these bins so much that I immediately put them to use! 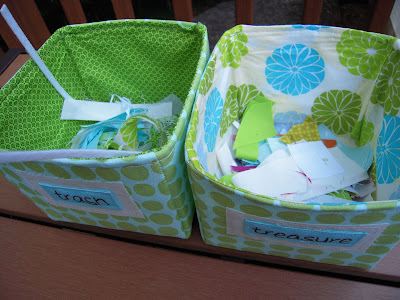 I'm going to go try to fill them up tonight!  Happy crafting!

What's on your mind?